Just so you can form an idea of what my usual painting level is, I have included these pictures. I worked on this army early to mid 2012, which might mean I’m breaking my vow of only tracking my contemporary work. Sorry.

The Minotaurs were painted for a ‘monster painting competition’ and so were painted with layering as opposed to drybrushing.

These Beastmen are the only army I have ever collected where the ruleset of the army was the deciding factor, as opposed to the qualities of its models or background. Nevertheless, I started out with some of the more imposing centrepiece models – the Minotaurs and Doombull.

Usually I abhor the idea of painting the rank and file of an army to a lower standard than its leaders, but for this army I allowed an exception in the form of the skin areas. The rabble of the army received a process of tallarn flesh basecoat followed by an ogryn flesh wash and then drybrushes of dwarf flesh and then elf flesh. However, for these Minotaurs (and the characters) I painted on the last two stages with streaked feather highlighting in the direction of the musculature, and a very watered down ogryn flesh wash was applied afterwards as a glaze.

One of the tribe’s Shamen and its Battle Standard Bearer, the latter converted from a standard Wargor.

These characters were painted after much of the force had been finished, as a form of reward for painting up thirty-odd Gors (no pictures of those unfortunately). Throughout my long years of painting I have always abhorred painting reds due to the difficulty of highlighting it up to something other than bright orange or muted pink, but I’m quite pleased with this finish. It might come as a surprise that the process is a simple basecoat of blood red, shade of devlan mud and then a highlight with blood red. That goes to show how simple painting can sometimes be. The same applies to the blood effects – they’re just a judicious mix of old GW purple ink and flesh wash, dabbed on with an old small brush. Instead of applying each droplet carefully, I let the surface tension of the inks do the work for me. Their shiny finish (a nightmare to all painters who used them in the past) works miracles, too. 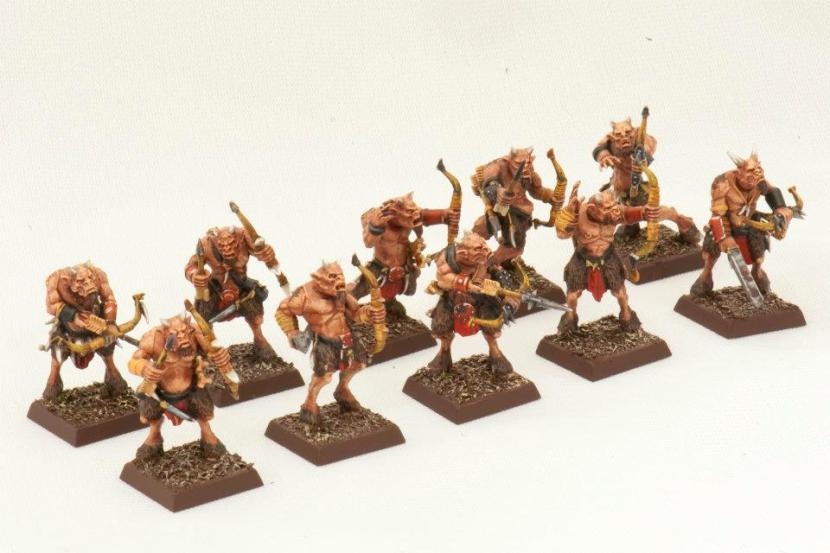 The unsuspected killers of the army – the lowly Ungor Raiders.

On the Ungors, you can see the effects of cutting corners with the skin areas. Still, I’m rather pleased with the outcome. Despite being plastics, the models have nicely rendered musculature, which catches a drybrush well. 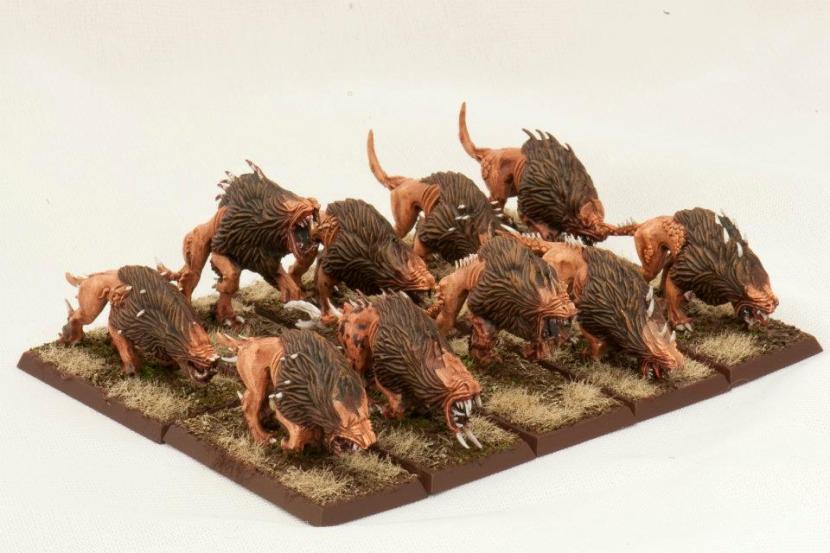 These Warhounds were obviously the easiest unit to paint.

…And the same goes for these Warhounds, with both the skin and the hair (scorched brown basecoat, badab black wash, calthan brown) sporting plenty of drybrushing and very little layer highlights – I believe I painted just the bone colours and tongues with any sort of layering progression. I could’ve done these models more justice and picked out some of the little mutations, but then again I aimed to portray a rather basic form of Warhound.

That’s all I can offer in terms of photographs of this project. The rest of the force currently consists of a few chariots, a block of Gors made into a big block of Gors by a few unit fillers, and a half-finished unit of Bestigors. One or two extra characters from the Mordheim Beastmen warband conclude the current painted collection. I have long thought of adding more units to the project including some Khorne Warriors of Chaos and Daemons of Khorne, but Warhammer is currently low in my priorities, both in terms of gaming and painting. Still, I had a good time painting these chaps and playing with them.

And with this I will leave you for a next iteration. Hopefully next time I’ll finally be able to show some more recent work from the historical side of things – my Arab warband for SAGA is nearing its completion, and then it’s time for some more Napoleonic French cavalry. If you have reached this point in the post, then I will thank you for your patience and hope to interest you in some more!