As promised, a historical model, mostly as a test of the different cameras I could lay my hands on. I ended up using my mother’s iPad (cue readers assuming I live in my parents’ basement) and regular daylight. The pictures ended up a bit dark but overall I’m not too displeased with the pictures, though of course the difference with the Beastmen photographs is vast. These pictures have also not been tinkered with, as I currently don’t have Photoshop installed on my computer. I might upload some enhanced versions of these pictures in the future, but enough on photography – on to the miniature! 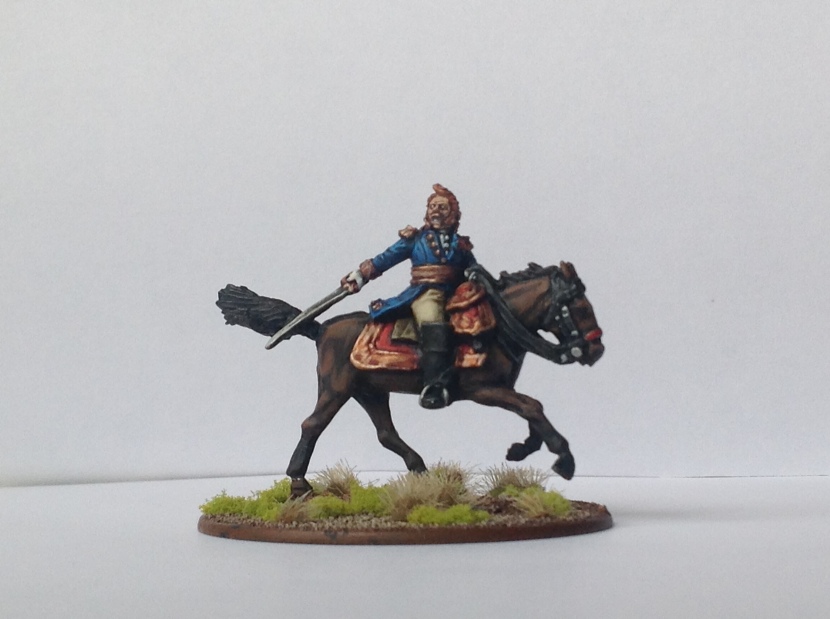 A brilliant model by the Perry brothers.

It’s fairly possible that I am a distant relative of this historical persona, so as soon as I decided I’d begin collecting a Napoleonic French army, I knew I had to get my hands on this model.  After picking him up at Crisis ’12 I set to work painting him – and what a delight it was. The model comes in one part yet none of the areas are hard to reach with a brush due to the dynamic pose.

Probably the first miniature with a bald spot I’ve ever painted.

My Frenchmen are the first army I’m (mostly) painting with the new GW paint line, so I thought I’d quickly offer some of my thoughts on them, seeing as how this model has a bit of everything: strong blue, strong red, metallics, washes, highlights, etc. etc.

Overall I think they work well when you limit yourself to the system; basecoat followed by layers, interspersed with washes.  For example, the red on Ney is a basecoat of mephiston red washed with druchii violet, followed by highlights with evil sunz scarlet and then wild rider red.  And before you comment – yes, I feel stupid writing the names of some of these new paints. What were they thinking?

Beyond this issue of nomenclature, however, lurks a far greater problem, and that is when you step out of the boundaries. The layer paints boast some really nice tones and cover fairly well over their equivalent basecoat, but when you try to basecoat with a layer paint, prepare for a world of pain. Warpstone glow for example, a mid-tone green comparable to the venerable snot green, is a staple base colour for the different green uniforms which some of my French wear, such as the dragoons and chasseurs à cheval. While the old snot green had great coverage, I find I have to use two coats over black with the new warpstone glow.  The alternative, which is to first basecoat with the very dark caliban green, doesn’t offer a much better result as the two tones are wide apart.

And sometimes you have to tinker with the system, too.  With the gold I had to be creative with the metallics in the paint range: a basecoat of gehenna’s gold, which is a layerpaint with shabby coverage (who on earth basecoats gold with a dark bronze anyway?), washed with druchii violet, and then what? I looked at the different light gold tones they had, but ended up using sycorax bronze. Shock and horror for GW, I hope.

I might do a full-blown review of the new paint system in a future contribution, but for now, those are my thoughts vis-à-vis  this model. When looking at my paintjob in hindsight,  I think I was nearly at the top of my game as far as technique went without going into blending and such, and more importantly, I had a great time. You can expect to see some more Frenchmen in the near future as I’ll photograph the other units soon enough, plus the heavy cavalry I’m painting up for a friend. Keep your eyes peeled!