Time for another blog update on a Yesteryear Wednesday! This time I’ll take you back nearly twelve years in the past, to one of my first models ever. A note to sensitive readers: it’s so bad you might cry. I certainly did.

Twelve years ago, I passed by the GW store in Brussels, right after my exams in June 2001. There were some well-painted models in the store display, and I thought to myself “hey, I could do that too!” The result, of course, being the horrid spearman on display today. I bought the boxed set of the game (the 6th edition one with Empire versus Orcs) and the basic paint set (with those screw-top pots that dried out after one use) plus a couple of extra paints such as liche purple, shining gold and black ink, the results of which you can see above.

Probably my first conversion too, as the shield was pilfered from a Bretonnian Knight.

My reasoning was that a wash of black over the entire model would make sense, which it obviously did not. On this guy, I somewhat corrected the mistake by washing the skin with flesh wash instead, but the rest of the model is turned immensely dark and shiny by the dubious effects of the old GW black ink applied heavily and undiluted. 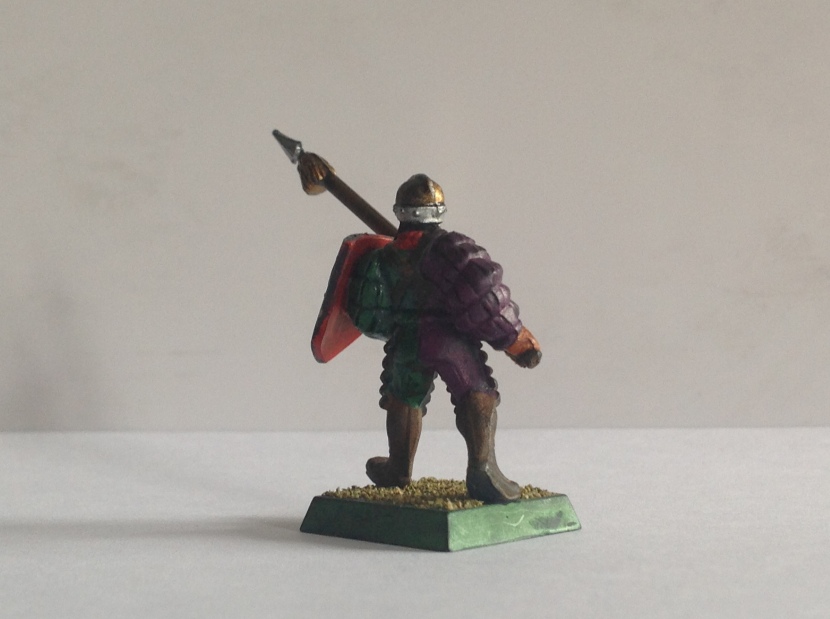 The back of the shield is really blood red, yes…

Beyond that, my choice of colour scheme was also terrible. Purple and green on an Empire state trooper, what was I thinking! As you can see, I also didn’t understand the 16th century type uniform at all either – why does he have a golden codpiece? Why are his leggings golden? Those aren’t knee-high boots! The main reason for the gold is that he was the champion of the unit and my teenage self had apparently felt the urge to denote this low-ranking sergeant by covering him in bling bling from head to toe. Shizzle.

But still, I can’t but feel nostalgia. Those were the days right after having wasted an entire year of my life on Diablo 2, and I was glad to have found a hobby that snatched me away from the computer screen. I saved up my paltry pocket money and went to the GW store in Brussels every Saturday afternoon where I tried my best at being taught painting skills by a unique french-speaking store staff (I’m dutch-speaking in case you were wondering) and from where I returned with a new blister and a paint pot or two. Those times are long gone along with the rest of my youth, but digging up a wayward test model from that bygone era, and one with such an abominable paintjob at that, does open the floodgates to a lot of beard-rubbing and moody humming. And waxing poetic about it, too.

Still, if that doesn’t immediately correspond with your own experiences, I hope this post will also be of aid to readers who are fairly new to the hobby and are let down by the quality of their first paintjobs. Don’t give up – it took me twelve years to reach the level of my recent efforts, and your first paintjob can’t possibly be worse than mine! The tools of the trade have advanced immensely in recent years, with woodstain dips, high-pigmentation paints and washes making life a lot easier for aspiring painters than back in the day.

As for my next post? Probably this weekend! I’ve been a busy bee these last two days and have made massive headway on completing the last 18 vikings for my starter army for Hail Caesar, and they should all be fully finished by Friday evening. The Anglo-Saxon player (Christian dogs! Cowardly turd-eaters! Worthless, beardless earslings!) has agreed to do battle with my Vikings (Shining sons of Odin! Brave axe-bitten fighters! Glorious silver-ringed seafarers!) next Thursday, and so they need to look their best. Haldebra, hai hai!