Wednesday, and that means another episode of Yesteryear Wednesday! Although, to be honest, this will be a special episode. Unfortunately, I didn’t have the means to photograph any meaningful oldies this week, mainly because I’ve been gearing up for tomorrow’s Hail Caesar battle. I have, however, taken the time to take a couple of shots of the entire army as it stands at the moment, which is what one of my readers asked a long while ago. 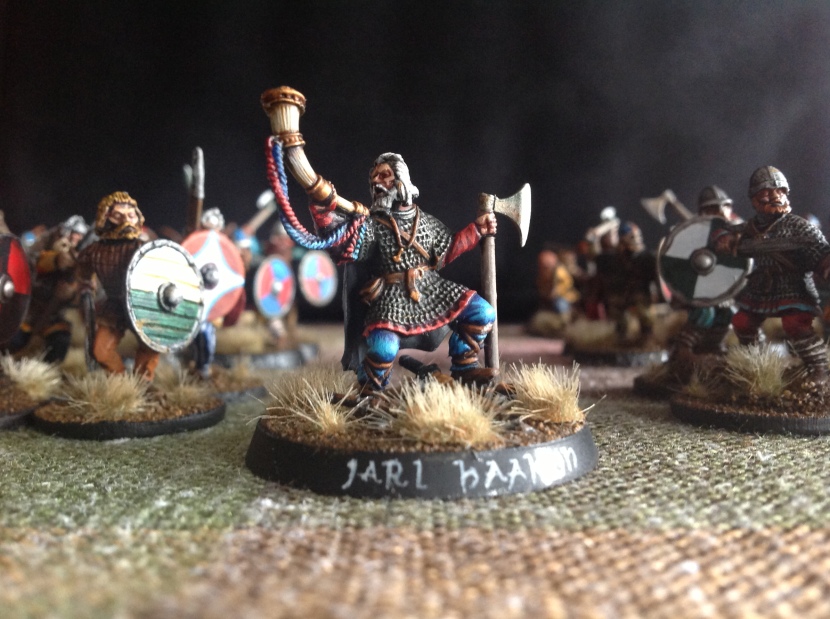 Another shot of good old Haakon, who will be the general.

The force will, of course, be led by Jarl Haakon. I’m glad that I can recycle my Saga warband for Hail Caesar, and the movement trays make this quite manageable. In Saga, the Viking warlord gets 4 attacks whereas most other generals get the standard 3 attacks – a nod to the battlecraft of this chap.

The entire force, and a chair. Don’t mind the chair.

There are actually a few slingers too many in the picture, as we agreed on a small unit size of 8. But as this shot encompasses the entirety of my collection of painted Vikings, I put them in as well.

So, from back to front, we have the small unit of bow armed Bondi (the slings will have to count as bows on this one), a mixed unit of Hird/Bondi, and a unit of Hird. There’s not all that much difference between the Hird and the Huscarls in the picture below as far as equipment goes, so I tried to differentiate them a bit by splitting the models up between manufacturers.

And here we have, again from front to back, a unit of bow-armed Bondi, another mixed Hird/Bondi unit, and the elite Huscarls. Due to a dearth of specific Berserker models I haven’t been able to give my units the characterful upgrade to incorporate some of those foaming-at-the-mouth types, but I’m sure they will put up a good fight nonetheless.

With that said, I’m done for the night. I will be making quite a few pictures tomorrow evening with the intention of putting up a battle report in the weekend, together with (hopefully) a painted shot of those accursed Dragoons. Stay tuna, as my Tau-playing friends would say.