Without wishing to sound pompous with such a thread title: I’m back in full Napoleonic mindset once again! I finally finished some books on the period, mos notably 1812 by Adam Zamoyski (finally) and I’m now reading the A. H. Atteridge’s biography of Maréchal Michel Ney – the latter’s first few chapters basically being a propaganda campaign for the French Hussars of the early Republic. In between all of this Napoleonic literature I’ve finished the first lancer regiment for my own collection, and here they are.

Metal models by – shock and surprise – the Perry twins.

As I might have mentioned earlier, my ultimate goal for my Napoleonic collection is to be able to recreate the order of battle for the Battle of Quatre-Bras, the one that Maréchal Ney bungled quite a bit. I’d be happy to be able to correct my (possible) forebear’s mistakes in 28mm scale, after all! I have the luxury of owning the classic Osprey book on Waterloo, but Wikipedia handily lists the order of battle as well: http://en.wikipedia.org/wiki/Quatre_Bras_order_of_battle . As you can see, there were two regiments of Chevau-Légér Lanciers involved: the 5th and 6th. The 6th is the one I’m showing you today: the opportunity to do some light blue was too tempting to resist!

The Chevau-Légér Lanciers were formed only late in the war, as a result of the successes of the Vistula Lancers.

When I picked up the blisters for this unit at a convention in March, I mainly did so for the sake of having a bit of variety within my own collection. They were sidetracked until now due to that dragoon & cuirassier commission that just dragged on and on forever. When I unpacked the models last Monday, I noticed some packaging errors, none of which were too bothersome, but I’ll still share them with you readers in case you consider purchasing these.

When you buy these models at a convention, most likely from the right honourable mister Dave Thomas, they are not packaged by the Perry twins, but by Dave. These cavalry come in blisters of three; I picked up a blister with a command group, and a blister of charging lancers and lancers with their weapons upright each. The idea was to build an eight-strong unit and have one model left over for colour scheme tests or whatever. Now, apparently the blister of charging lancers turned out to be elite company lancers which I at first didn’t want to incorporate in my unit, but I ended up doing so anyway. Secondly, I got two officer horses (without the pélisses) which is one too many, though I’ll probably find use for it. Minor problems all and it certainly didn’t bother me much, but I will however inspect my purchases on site next time. 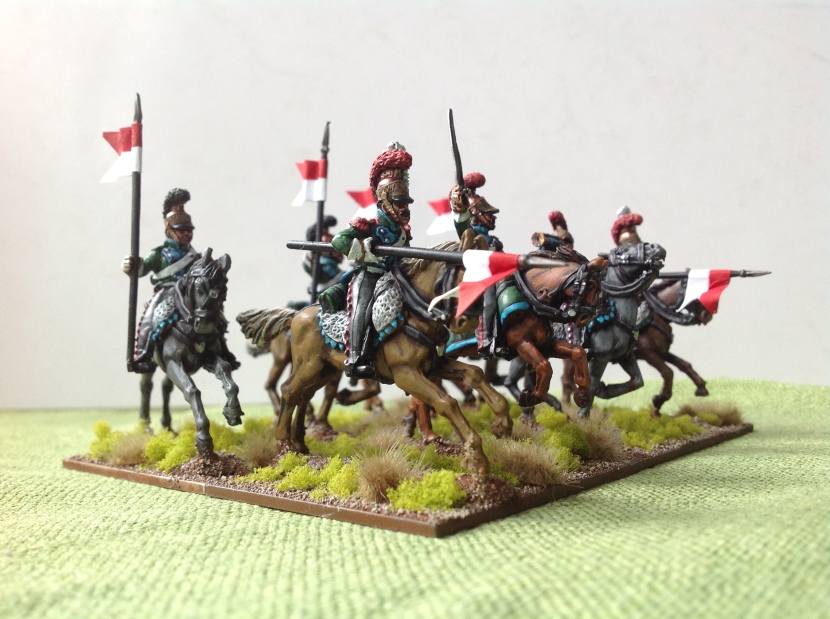 The dynamism of these models is astounding.

Painting-wise, this unit was much similar to the dragoons – some green and grey block painting, a black wash and then the rest of the colours. The main difference however lay, of course, in the light blue facings which, as I mentioned already, are the spot colour of this unit. I basecoated these areas teclis blue, washed with drakenhof nightshade and then highlighted with temple guard blue. Simple but effective I’d say, and well contrasted by the many red areas on these miniatures. Speaking of red: there is some controversy regarding the lance pennants. Some historians maintain that the pennants were dyed white over red, but most sources agree that it was red over white. I went with the majority and chose the latter, which I believe looks better on the charging models, too. I simply cut printer paper to the right width and double the required length, folded the strips around the lance shafts and glued the ends together with PVA, and then cut a V-shape out of the ends with scissors. The red was painted with thinned down mephiston red, and once dry I bent the paper a bit to get the billowing wind across – even on a tabletop.

That’s pretty much it for this week. I don’t know what next week will bring, not yet – I extricated the last of my unpainted Sarmatians from the pile of plastic and pewter (PPP from now on? Or maybe not) but I also feel like doing a couple more Flemings including a stand of command models which I’ll be able to use as a Warlord model for Saga, as well as some cavalry. Don’t know what it will be yet, but you’ll find out soon enough!