Hello you good people! First of all I should apologise for the lack of recent updates. I was working on two companies of Napoleonic light infantry just before and after my vacation, and just before they were finished I decided to commence work on another commission, the results of which you can witness below. Rest assured that I will do my best to finish those Napoleonics by the end of the coming weekend and show them to you – but don’t get your hopes up too high because I have a wedding to attend on Saturday and I predict a massive hangover on Sunday. But enough of that, let’s take a look at today’s offering.

As said, these three chaps are part of a small commission of a total of eight mounted models. They’re early 18th century French generals, War of the Spanish Succession types. I have to be honest: I know next to nothing of that war apart from there being a ridiculous amount of tricorn hats and lace. There’s one more Frenchman coming and then some Bavarians and Austrians I believe. The commissioner was kind enough to provide me with some helpful pictures both of painted models and of portrait paintings of generals of the age. 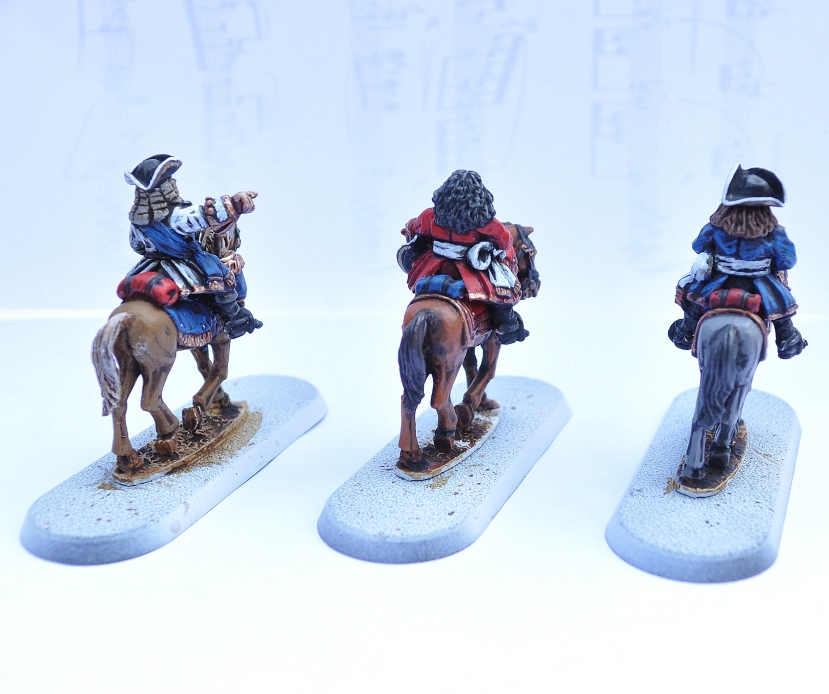 The pictures came out slightly bluish – that’s what you get for using morning light!

Nevertheless I did vary the dress of these generals while keeping the palette unified. From the information I’ve gathered, the man on the right is wearing the ‘regulation uniform’ for a general of the age, although it was rarely worn. The one in the middle wears red which features in plenty of portrait paintings, and the one on the left wears white as a nod to good old pre-revolutionary France. Uniformity was rather uncommon back then, after all. 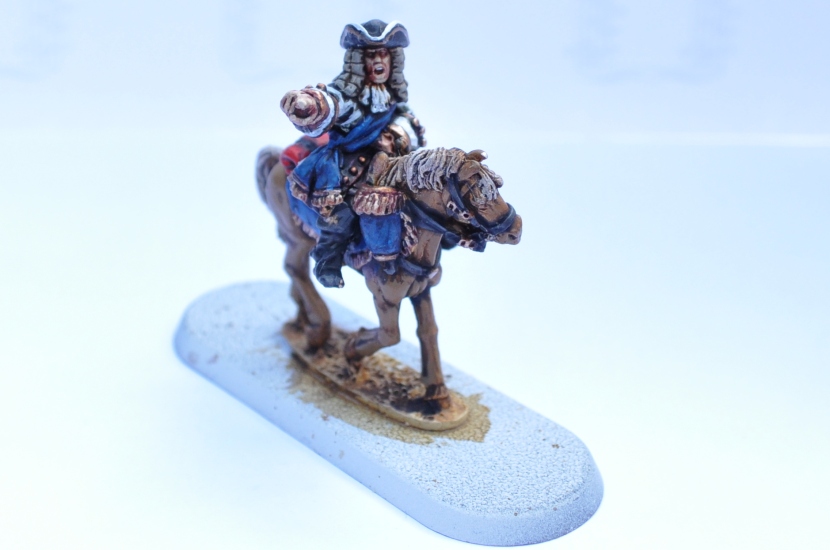 You can see the white in a little more detail here. Nice teeth, too.

Painting-wise, I combined a few of my stock techniques on these models. They were undercoated white and then washed seraphim sepia to bring out all the detail. Blue, red and gold were block painted, altogether washed purple and then highlighted with the respective colours. Something new I did was the basecoat for the white parts: instead of slapping on some grey or off-white I just washed these parts with drakenhof nightshade. The blue and sepia washes conspired to produce a nice bluish grey which proved a blast to highlight onto.

A final picture of their mugs.

That about does it for this blog update. You can see a paint chip or two on these guys already which I touched up after the pictures were taken, and now they’re safely stored to be delivered to the commissioner this evening. A one-week turnaround for three generals – not too bad I’d say!

Next up is a fourth Frenchman for the same project and those Napoleonics. I’ve also received the last batch of Sarmatians, so a few cataphracts might pass the painting table too next week. Stay safe, San Diego!