It’s Wednesday again, and that means I owe you another look at one of my old models or paintjobs. Last weekend my girlfriend left her camera unattended so I took it to my local game store (Het Spelplezier in Halle) where some of my older army projects are gracing the display shelves. I didn’t get a whole lot of time to photograph my models nor were the lighting conditions optimal, but otherwise the results are decent.

Mostly a Vampire Counts Corpse Cart with a Great Cannon barrel on top.

As Games Workshop has become hideously expensive over the years, I started with this project for the simple reason of being able to play the same collection of models with two different armybooks – Empire and Vampire Counts. The basic infantry was simple enough to figure out; there was a hobbyist featured in the 6th edition Vampire Counts armybook who had done the same. What needed more pondering were the warmachines.

Least plausible model ever – just one shot from that cannon and it’s curtains.

What I did was to flip the Corpse Cart structure around so that the zombies would be pushing it instead of pulling. I cut a ‘gulley’ in the pile of corpses so as to make the cannon fit rather snugly, then added more arms from the Zombie kit to the corpse pile which would hold the barrel in place (yeah right!). The structure with the lanterns and bell was glued on backwards as well. 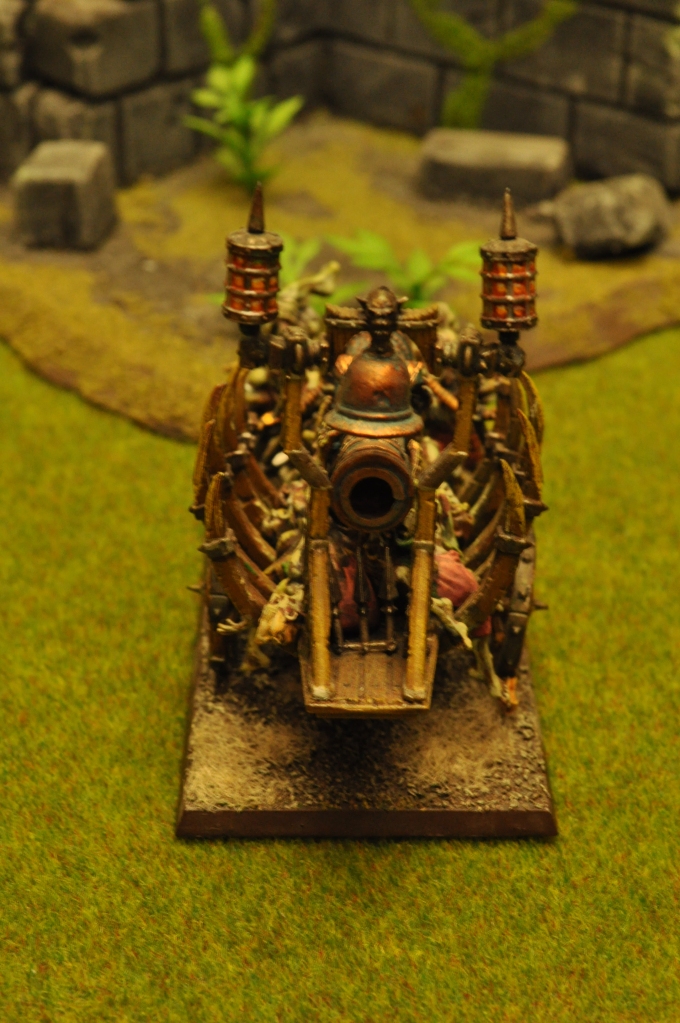 The painting techniques I used on this model – and project, really – were already decided before GW switched from selling inks to washes, so I used plenty of drybrushing on this. For example, all that zombie flesh was basecoated bestial brown then drybrushed with rotting flesh, before receiving a yellow ink wash. It’s not the kind of way I’m painting these days anymore, but if I ever continue work on this project I’ll have some adapting to do. This is a model I painted in 2006 or 2007, I can’t remember exactly.

There you – a look at a project I had never show you before. As always, there is more stuff coming up, but it’s been delayed somewhat as my health hasn’t been that good lately. Still, soldier on we must!