As announced yesterday, I’m back with another blog post! Yay! As I’m wrapping up projects left and right lately – the painted model counter for 2014 is already close to 400 – I’m getting quite close to finishing off my Dacians, and the final full unit are my Nobles. Here we go:

Models by Warlord Games, with a few Gripping Beast exceptions.

While I was collecting and building my regular warbands and falxmen, I left all of the chainmail-clad bodies to the side – two of these per sprue. I didn’t quite have enough for the 24-strong units I like to build, so I had to add some bodies from the Anglo-Saxon Thegns plastics by Gripping Beast. Same with the shields – my box of falxmen came with sixteen metal shields to which I added some of the plastic shields, and voilà, an uparmoured unit of Dacians was built! I think they look a lot more dangerous than the ‘official’ Dacian Nobles by Warlord Games, which consist of the simple Celt plastics with metal helmeted heads and shields. 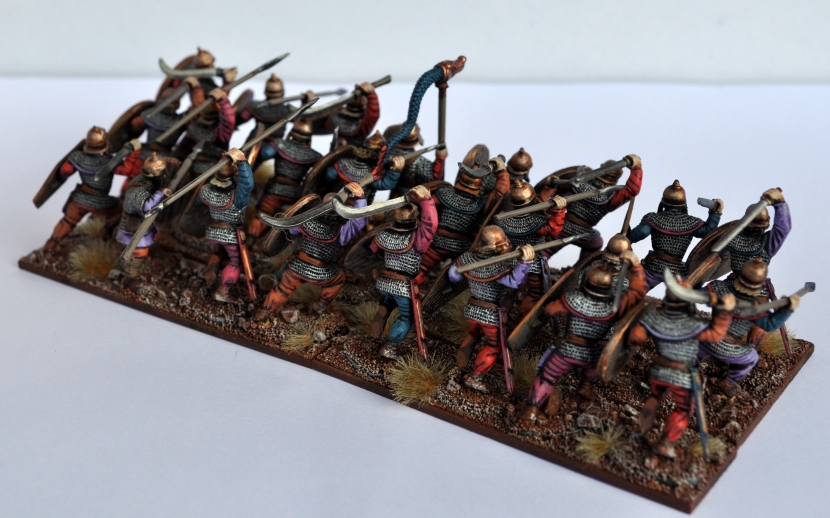 Some extra metal falxes were spread among the unit.

I painted them up with the same techniques I used on the rest of the army, but I painted their shields uniformly and also used a lot more gold to denote their wealth. One thing that I really had pains working around were the hands, though. The detail on the fingers of these plastics is really shallow, which meant I had to freehand the fingers – not fun, believe me.

Still, that’s them done – the second-to-last unit of my Dacian army. There’s just two small units of skirmishers to be done now,  and then I’m putting the project on hold. I’ll try and get those skirmishers out of the way sooner rather than later, but for now I’m going to be focusing on some new commissions. Au revoir!