Oh yes, that title – well why not? The benefit of our glorious hobby is that our gruesome conflicts are confined to the tabletop, so no politically correct babble to cope with! With that said, this is the first multicultural blog post I’ve ever posted up – and likely to be the last for a while.

The models below were painted for Kurt, he of the many crusader models I handled in 2014, and it’s partly a bookend of one warband and a colour scheme test for the next. Let’s see how that went. 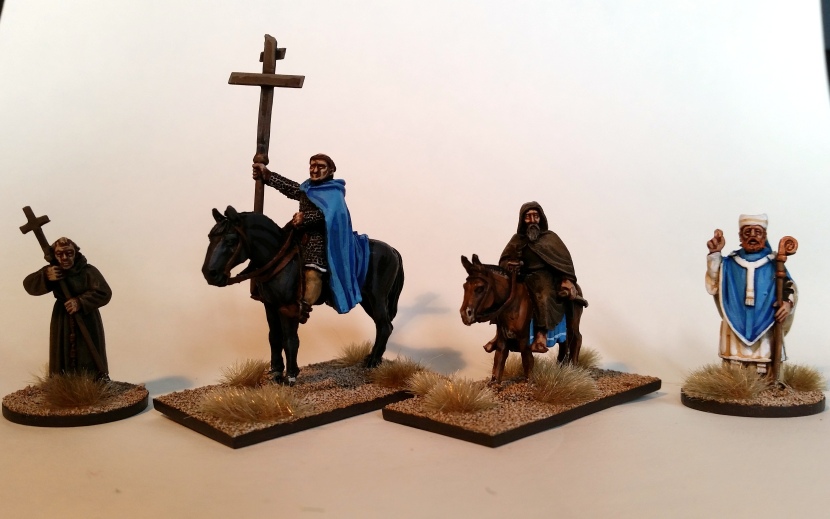 All models in this picture by Perry Miniatures.

With the powerful new rules for priests in Saga I had an inkling of a feeling I’d have to paint some up as well, and here they are. I believe Kurt is only going to use the mounted characters, perhaps even Adhémar of Le Puy alone, but I went ahead and painted the entire pack – no loose ends!

This also marks the first donkey I’ve ever put a brush to.

Nothing too special to report about the paintjob, other than me finding back my pot of guilliman blue which is marketed as a glaze by GW but works perfectly fine as a wash as well. I really like the royal blue tone it left in the cloth folds, and I’ve put it to use on the following models as well.

All models by Artizan Designs.

I took these pictures right before giving them back to Kurt, so the lighting is excessive and the background intrusive, but I hope you can get an idea of the paintjob. Readers with decent long-term memory (habitual drinkers, you’re out of the race) will remember me painting up these exact same sculpts for my own Arab warband, so I was interested in handling these chaps rather differently from my own.

Having decided to go for a riot of rich colours, I put on my experimenting boots (ahem) and basecoated these models white before going to town on them with various of GW’s washes and glazes. The main colour of orange, for example, was created by successive shades of fuegan orange, reikland fleshshade and seraphim sepia. I tried out Vallejo’s pale grey wash as well, but it’s shite. Where needed I added in some freehanding, and I’m particularly fond of the white-and-orange striped effects. Any areas other than the robes were handled in the usual fashion.

This is just the beginning of an Arab warband Kurt is having me paint up, so it’s another focus for 2014. Really enjoying this colourful palette so it shouldn’t go stale quickly.

Other than that: the second battalion of Prussians is done, but I don’t know if I’ll be able to take a decent picture of them. It’ll probably be the next update, unless I can get going on some more WW2 stuff. We’ll see!