Last Saturday at Warcon 27, our local annual wargames convention, one of our club suddenly erupted in triumph as he made his way from the traders to our demo table (also known as “that table underneath which we stuff our manifold purchases”). He’d apparently received a great deal on a Dreadball starter set plus two extra teams for the game. I’d heard rumours about this game being an improved version of the venerable Bloodbowl, and with our Thursday evening club nights stuck in a bit of a rut, I thought I’d hop on the newly-launched band wagon. However, my own team will be handled later, as I’ve first painted up Kurt’s Hobgoblin team. Let’s take a look.

These are the first Mantic models I’ve done, and I have to say I really like them. They’re advertised as ‘sprueless plastic’ which is great, as they’ve got the standard flash and mould lines of plastic models but without needing assembly. Detail is about average for plastic models, although the big guy in the next picture could’ve used some more. 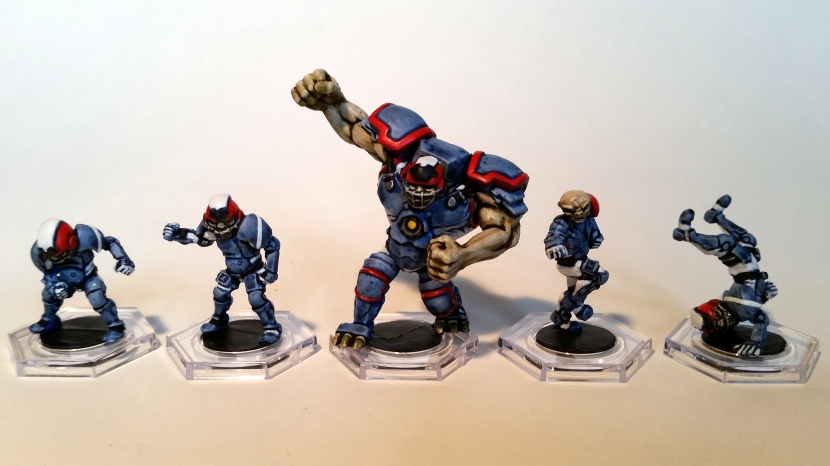 The big guy is my personal favourite.

I painted these over a white undercoat, with washes of guilliman blue and drakenhof nightshade on every part of the models apart from the skin, which was washed twice with athonian camoshade. The undersuits were then painted white using the underlying dark blue for shading. The red was basecoated khorne red then highlighted evil sunz scarlet, and the skin was given a bleached bone highlight. Black for straps and silver for small metal bits, and done.

My own team will be dealt with soon, so check back!