While recently rummaging through a couple of boxes in search of something entirely unrelated, I happened upon a Beastman model from years back. As you might have surmised already, something deeply nostalgic began to tingle in my gut – reminiscences of trackless hours hunched over plastic GW crack, slaving away with paints like elf flesh, blood red and the iconic vomit brown. In the end I decided to place this man-goat in between my current historical work and, at last, here he is. 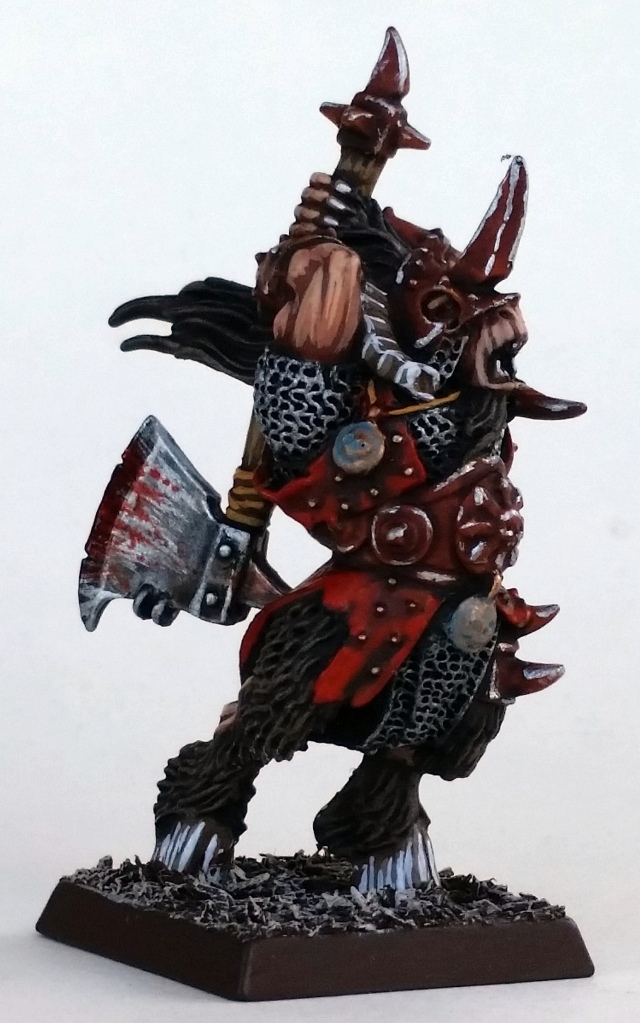 Model by Games Workshop (of course)

First off – if it were any other GW model I’d have left him in that box, but with a pose like that you can’t say no. To me, this model is a perfect illustration of GW’s heyday. Back in the mid-2000s they were bringing out sensible plastic kits but still recognised the value of white metal for character models. They still had actual sculptors working for them instead of today’s lazy underpaid manchildren with an Autocad degree. I can’t help but think that a lot of the commitment to making great models is lost when the sculptor no longer has the actual 3-up in his hands to connect with – it’s a bit like the ethical discussion regarding army drone operators, albeit with less dead civilians. 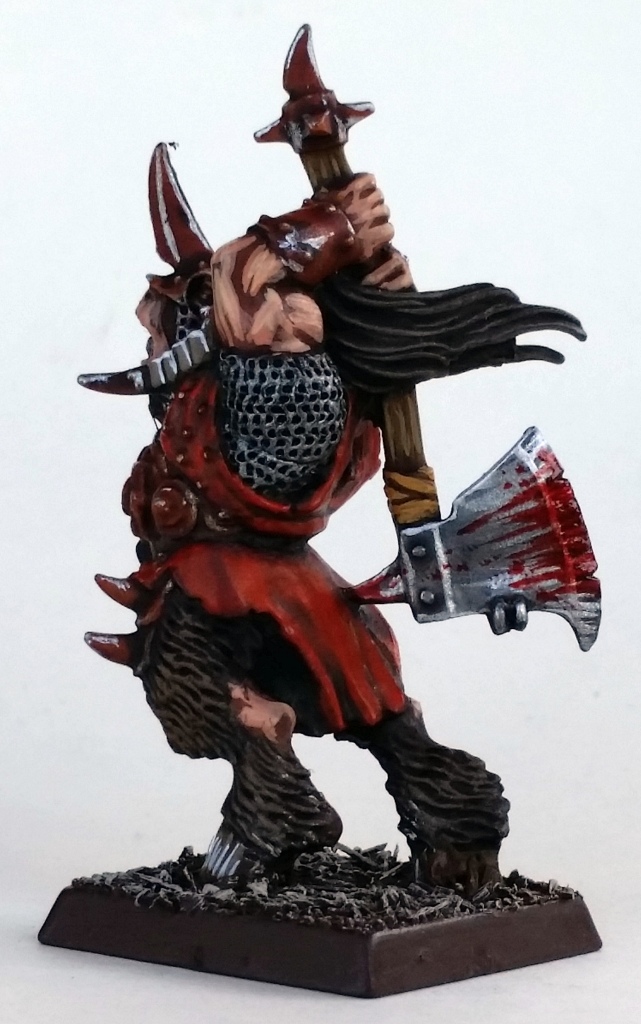 A fantastic but natural pose

Painting-wise, it’s a bit of a hybrid in that I used as many of the old GW range as I had lying around, but had to make do with using several of the new paints. For example I’ve used the old macharius solar orange for the orange armour plates, but washed them with the newer shades. I think it came out slightly darker than before, but overall I’m pleased with the effect. I’ve also decided that the old skin tones are flat out better when unmixed; dwarf flesh is much more vibrant than cadian fleshtone and kislev flesh is too light of a tone for final highlights as opposed to elf flesh. Hence I’ve used the old range skin tones on this model.

One problem is that I’ve managed to misplace my huge bag of yellowy-looking static grass, so I currently can’t finish the base. Still, it’s playable at the moment, so I’ve no qualms about that bit of detail. It’s a shame that ‘playable’ no longer means a thing, though, because Warhammer Fantasy seems to have completely died down in my gaming circles. Years of mismanagement on GW’s part, with the End Times as the final (overpriced, gold-trimmed) nails in the coffin. We’ll have to see how the next edition will pan out.

That’s it for today! I have another update ready for you tomorrow, and it’s going to be an even bigger shocker than this one… So check back soon, dear readers, and adieu!