Just a quick update while I’m moving house; the background for the photographs below is actually my newly dedicated Napoleonic section in our library! Work is still underway on the whole move and I haven’t been able to do much painting in the meantime, but by next week everything should be in order. Apart from my elbow, that is – still suffering.

Models by Perry Miniatures; plastics with a metal command set.

It’s a bit of a mixed bag, this unit. Most of the greatcoated models are second-hand pieces which I received in return for painting my friend Kurt’s Dragoons and Cuirassiers a long while back. I kept the models in my pile until now as they were dreadfully mangled by thick white undercoat spray. Still, I managed to paint them up despite the loss of detail and I don’t think it’s all too apparent (at least, not in the pictures!). The command set are metal models, and I’ve added a sapper to spice things up a bit. Burly man in a bearskin and an apron wielding an axe = awesome. 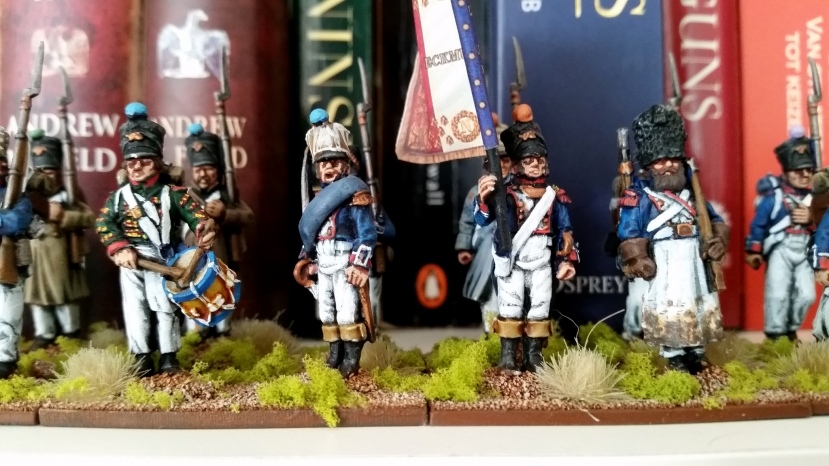 A close up, rather unfavourable to my brush skills!

These were actually painted a long time ago but it’s only now that I’ve mustered the courage to base them and add their flag. These are the first battalion of the 72nd Line infantry, part of Campy’s brigade in Bachelu’s division. The brigade was composed thus at Quatre-Bras:

However I’ll be composing my tabletop version in the following manner:

Less models to paint, you see.

That’s it for now, though! I have another line infantry battalion in the works, these will be for the 108th, but it’ll probably be a while before they come ’round the bend. I have plenty of commissions going and considering my fractured elbow… Anyway, we’ll see. Up next are probably some more Prussians!