Still slaving away at the Prussians? Yup. I’m trying to get it all squared away before Crisis 2015 rears its expensive head and my lead pile gets an (un)welcome injection (depends on who looks at it, me or the missus) and I’m happy to say I can report significant progress. I’ve completed a total of 36 musketeers – which I won’t be showing you as they are identical to those fusiliers I showed earlier and so contribute nothing to the blog – but I’ve now also churned out some Jaeger. Let’s take a look at these.

Splendid models, these. The commissioner sourced these from Calpe Miniatures, a company I was previously completely unaware of, and I had a great time painting these up. The models are fairly broadly built but otherwise realistically proportioned as far as hands and feet go. I think they match up better with Warlord Games’ scale of Napoleonics rather than the Perry Miniatures’ battalions of Musketeers they’ll be fighting in, but they won’t stand out like a sore thumb at all.

The left hand company with its officer.

As you can tell from the bases I went with a green undercoat from Army Painter; other than that the painting process was exactly identical to that of the Musketeers – same colours, same application. These models took even better to my wash-heavy painting style, with their deep detail. 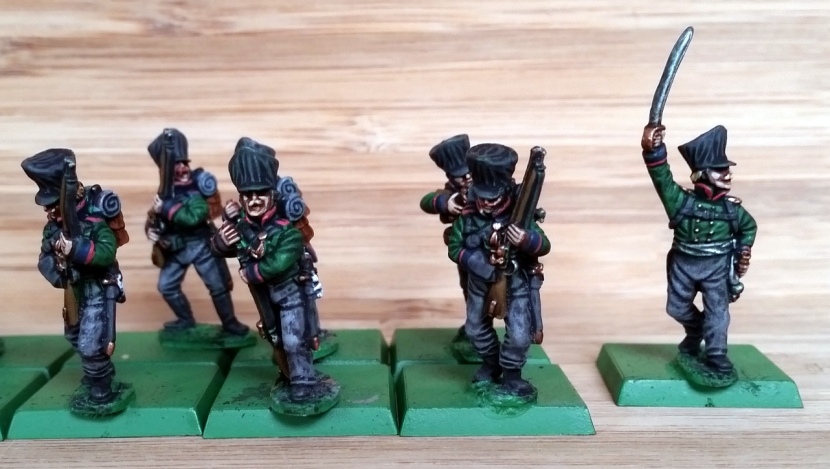 The right hand company with its identical officer.

I used a chopping block as background because my big sheet of white paper is still at my parents’ house… but I thought the chopping block would be a great way of telling Henk what’s in store for these chaps once they meet my well-oiled French fighting machine in battle! At any rate, I hope he’ll be as happy receiving them as I was while painting them.

Last on the list for the Prussians this year are 24 further Musketeers and six mounted officers, including Blücher and his coterie. No more Napoleonics this month though – it’s time to recharge my batteries (12-pounders, if you’ll pardon the pun) by tackling some other stuff that’s been cropping up. I have one further update for you very soon, in fact. So stay tuned and hit that sexy follow button!