Why do I always tell myself not to start new projects, when such good intentions are clearly in vain? Here’s another one fresh off the painting table: Celts! I was foolish enough to pick up the wonderful Vercingetorix model from Warlord Games at Warcon ’18 and think I could leave it at that – well fat chance, Victrix is releasing some terrific plastic Gauls these days and I had to bite. My friends brought a set of their new Gallic Warriors as well as one of Fanatics home from Salute ’18, and I’m happy to report they’re already done! Huzzah!

First up, we have the meat-and-bones of the force: a big warband of your ordinary Celts. These were pretty straightforward to assemble: a mix of the both the topless and the fully dressed bodies, and of both the helmeted and bare heads, with swords, spears and a few javelins thrown in for good measure. Painting-wise, I opted for a radically different technique: I undercoated the models AP skeleton bone, heavily drybrushed them white, then applied all colours with just washes. Usually several washes were needed across a given area to get the required result, otherwise things would look too pastel. For instance, the skin tone is two washes of reikland fleshshade and one of seraphim sepia. Obviously, the metallic were painted in the usual manner, and I took special care to make them look super shiny for contrast. Also, as Celts wouldn’t look the part without them, I added freehanded patterns to at least one item of cloth on pretty much every model, with regular paint of course. 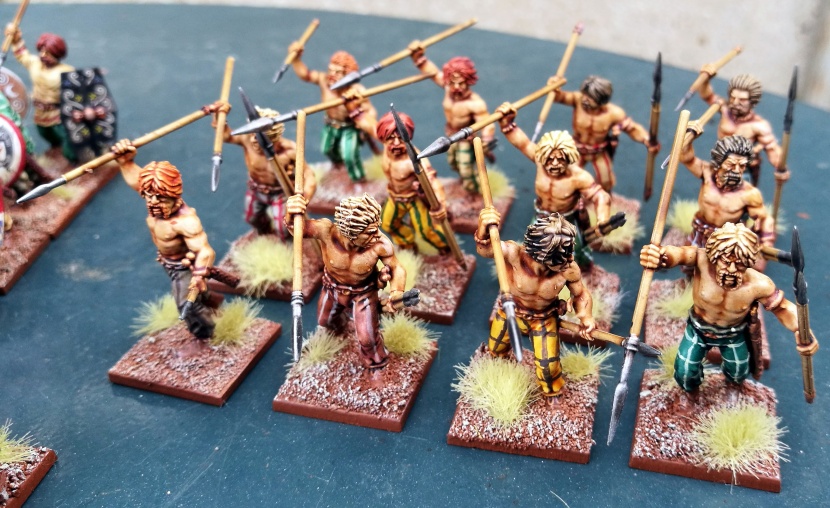 Also built from the Gallic Warriors set are these skirmishers. I elected to use just the topless bodies and bare heads for these – to get the point across that they’re the poorer kind of warrior. For these I had to do some cutting on the left arm to equip them with spare javelins, which means they’re not equipped with shields – hence, they look a lot less spectacular than the others! 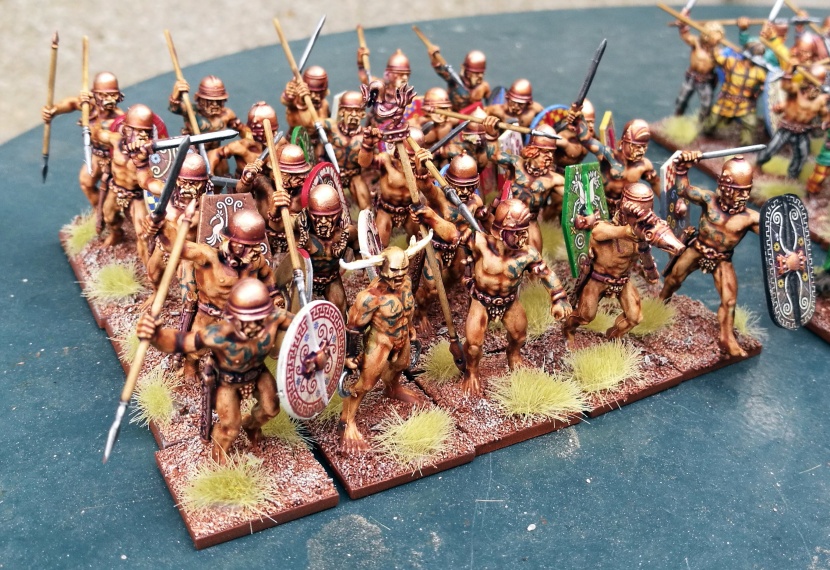 Penis! These are the fanatics, and they were stupidly easy to paint with the aforementioned technique. It’s a 24-strong block of troops but I think I’ll be getting some more to bulk out the unit, for games like WAB where they really shine when fielded as a big block. In the first rank you can see a druid model from Warlord Games, which was a leftover from my Dacian project. He’s a bit smaller (haha…) than the others, but otherwise fits in fairly well. Using watered down incubi darkness I added tattoos/warpaint to these models to spice up their appearance, which I think was much needed. 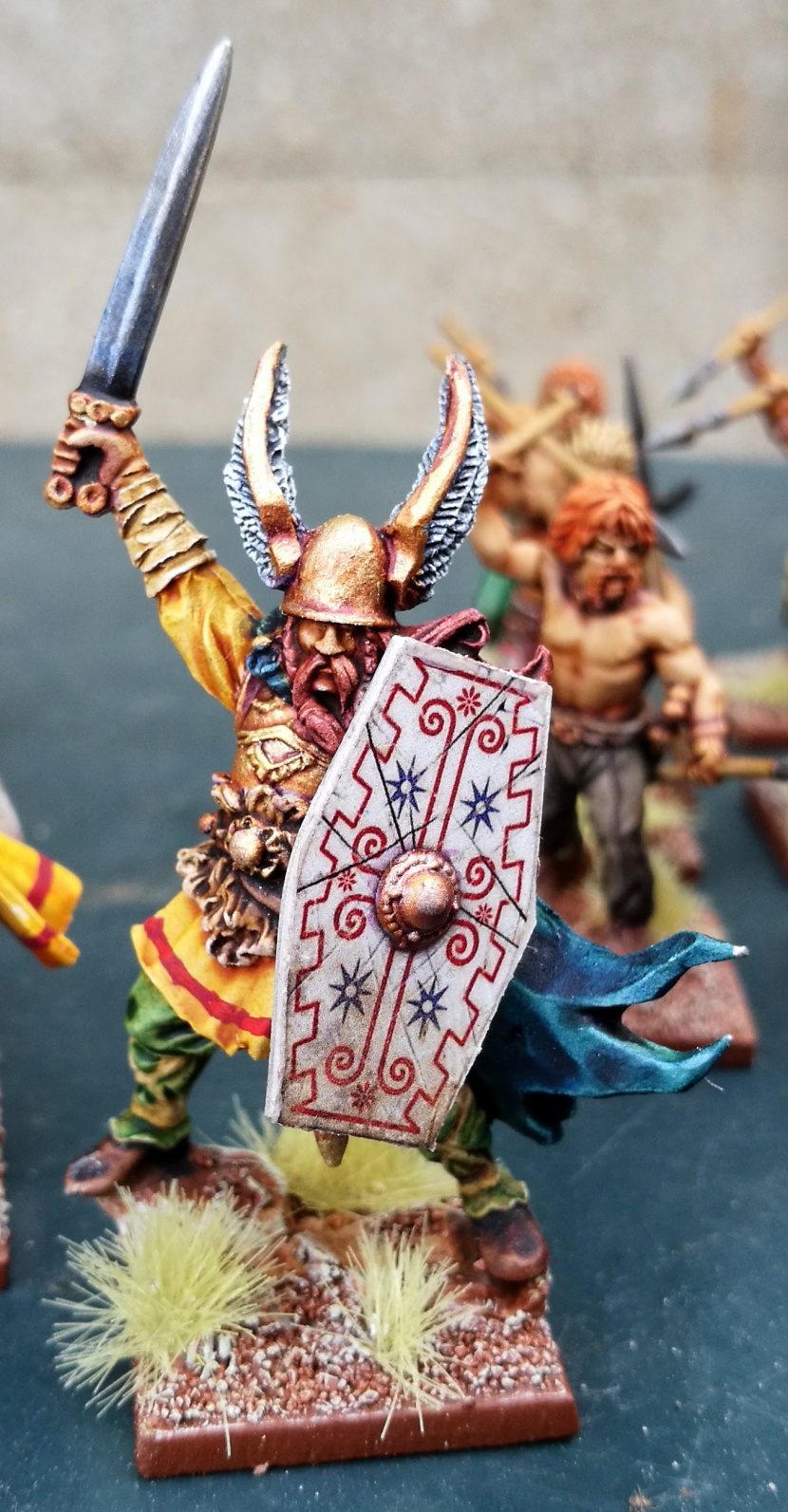 Finally, here are two other characters; the first is that wonderful Vercingetorix model from Warlord Games. I altered just one thing, which was to give him a spare plastic shield so that I could apply a LBMS transfer without too much of a hassle.

The second is a plastic command model from the Gallic Warriors set which I’ll be using as a Battle Standard Bearer in WAB, or a regular standard bearer for other games. This guy received an open left hand from a Victrix hoplite, so that I could portray him leaning on his sheathed sword. Not my most impressive conversion ever, but I think it’s an effective little distinguishing feature.

So, well, there you go! A whole set of Celts, ready to be fielded alongside or against my Carthaginians. As models always look better when put next to each other, I have a couple of group photos for you.

This first group shot is for those moments when I’ll be playing WAB. The two decently sized warbands will be intimidating to most opponents – the druid confers Hatred to the already Frenzied fanatics, and the Battle Standard Bearer and Warlord go into the big Warrior block to boost its staying power. The skirmishers will either be fielded as a single big unit or two smaller ones.

The second group shot shows the troops broken down into 12-strong units, for our games of Hail Caesar, To The Strongest, Sword & Spear and the like. It’s a pretty healthy division, with five standard units and two small units.

Project done – for now… I once purchased a box of Gallic cavalry from Warlord as well as a Gallic cavalry command blister to use with my Dacians but never got round to using them, and I think they’ll be used here. The new Gallic cavalry from Victrix are also leering at me, of course. As 24 or 25 is a bit small for a Naked Fanatic unit I’d like to bump the unit up to around 32, and I might purchase some metals from Warlord Games for variety as another pack of 24 plastics would be a little much. Finally, I’m of a mind to build a warband of nobles on foot, using the regular plastic Gallic Warriors but all helmeted, with swords, and with the capes attached (which I didn’t use much yet). Plenty of options!