It’s a beautiful Spring day, so what better way to celebrate it than to show off the massed ranks of my Vampire Count army eh?

As usual, this army kind of snowballed from a few select models for Frostgrave, like the Tomb Banshee and the Spirit Hosts, via a short Shadespire detour with the Sepulchral Guard, to where we are now – at a rather big army. It all happened so suddenly… Actually, most of the models were purchased second-hand for the insanely low price of 50 euro for 40 skeletons, 10 Black Knights, Vlad and Konrad Von Carstein, 20 Zombies, 10 Grave Guard and a Corpse Cart!

Veteran readers of the blog might also remember the Undead Great Cannon I displayed many moons ago. In essence, this is the second VC army I have painted up in my career as a hobbyist, although this one is much lighter on the conversions, with a much larger emphasis on the colour scheme.

Let’s take a look at some of the units, one by one. Disclaimer: the pictures are far from ideal as I currently don’t have a setup for photographing large units let alone entire armies. I’ll make sure to photograph my character models in the lightbox soon!

There it is in all its glory! Infantry to the front, special stuff to the rear. 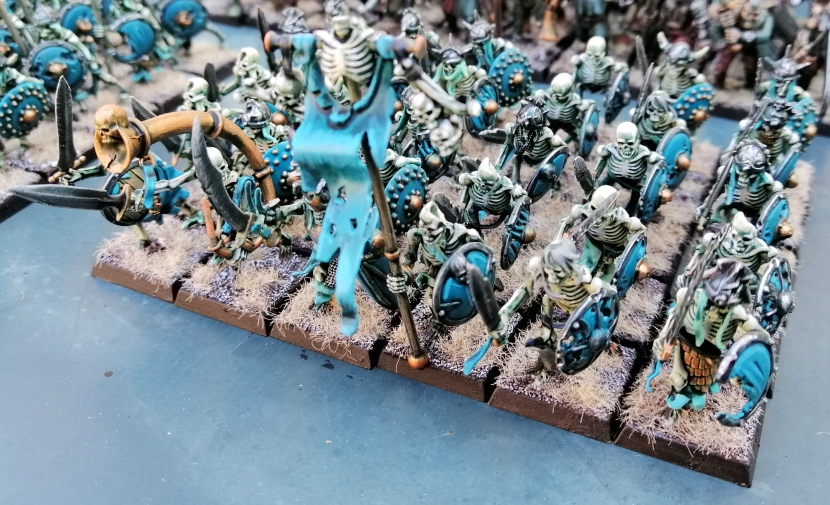 One of two 30-strong units of Skeleton Warriors, these are armed with hand weapons, the other with spears. I painted these up identically to the Sepulchral Guard.

A nice big block of 40 Zombies. As you can see these were repurposed from my previous VC army, as these models have been kitbashed extensively with Empire Free Company parts. I actually repurposed them by dumping coelia greenshade, the driving force of the eerie colour scheme I have going, over the old paintjob and then highlighting the colours back up.

A unit of 10 Direwolves, which will probably be split into two units of 5 in-game. These were my least favourite models to assemble and paint, and I was happy to finish them off. Never again! 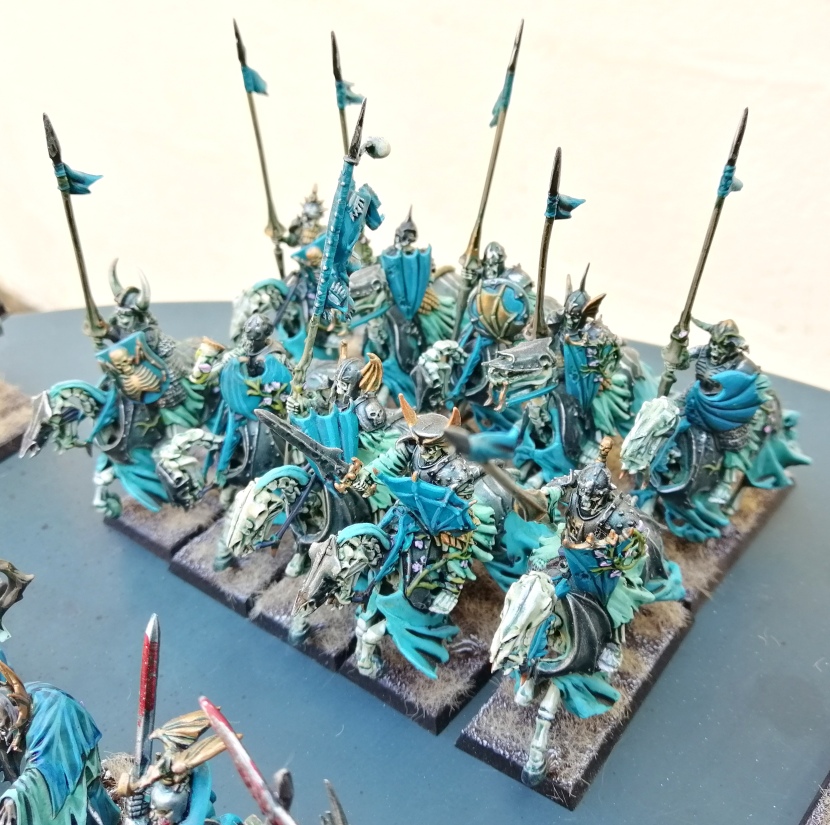 A big 10-strong unit of Black Knights, which took me quite a long while to finish. Lots of intricate detail like the vines.

One character to show here, though, as I’m not sure it’ll fit into my light box! I found this Zacharias the Everliving on the shelves of my local game store as a leftover from a round of Made To Order and could’t say no. Perhaps I wish I had… The model was a pain to assemble, as parts somehow didn’t take my superglue very well. Just before shooting these photographs I actually had to glue Zacharias’ right hand on again as it had somehow fallen off whilst sitting on a shelf. To make matters worse, I managed to drop the model during basing… Lessons learned.

An unconverted Corpse Cart this time. The model had been completely assembled by the previous owner which made some aspects of painting it a veritable challenge, but it worked out alright. For this one I used a barbarian flesh undercoat from The Army Painter rather than skeleton bone, as much of the model is defined by fleshtones. A couple of the army’s spot colours tie it in nicely.

Finally, some Ghouls. I ended up buying the Ghoul warband from Warhammer Underworlds, which comes with a Bat Swarm as well. If I can get my hands on an old Bat Swarm or two that would be nice! The reason I went with this set is that I’ll mostly be playing this army under 6th edition, in which Ghouls are small skirmish units rather than the main battleline blocks of later editions.

What’s next for this army? I still have a 20-strong unit of Grave Guard to tackle, another 6-strong unit of Ghouls (the 6th edition metals), and around 20 more Zombies which are in absolutely dire shape. I’ll try and keep you updated on their progress.

That’s all for today. I hope you’re staying safe and getting lots of painting time in – since the quarantine began some three weeks ago I’ve managed 159 models!